Fury from the sky

The history of the 508 Parachute Infantry Regiment The 26th Infantry Division patch and the 502 Parachute Infantry Regiment patch.
The 508th PIR adopted the Red Devil emblem and the battle cry "El Diablo" when they moved to Fort Benning, Georgia for parachute training during February 1943. The 508th did not have an emblem until then, so a contest was organized among the members of the regiment to create the best emblem and battle cry. Sergeant Andrew J. Sklivis won the contest and his design was chosen to represent the 508 Parchute Infatry Regiment.

The "Red Devil" emblem.
By mid-December, the 508th PIR reached full strength. The next month the 508th was moved to Camp Mackall, North Carolina, where they trained until December.
In Camp Mackall, the men stationed there often played baseball in their off-duty hours. There even had an actual baseball league. The 508th Red Devils baseball team had a 26–4 won-loss record in 1943, and clinched the Camp Mackall championship by defeating the 135th Quartermaster Company in the league playoffs. Shortly afterwards, a regimental order disbanded the team because it was felt that further play would result in the loss of valuable military training for the men. Had the season continued, it is likely that the Red Devils would have attained national prominence as games had been scheduled against the North Carolina Pre-Flight Cloudbusters and the mighty Norfolk Naval Training Station. 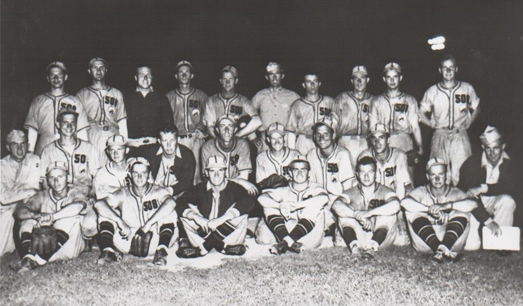 The 508th Red Devils baseball team.
(click on the picture to enlarge it)